Morning All! Well its just a diary of the guest about Poonhill trek on oct 2013. We just got back from another great trip round Nepal, having taken in loads and loads of exciting activities along the way. We started out with a 3 hour drive out from Kathmandu to Benighat for a spot of white water rafting. Being late October the river wasn’t very high so the grade drops down to about a 2+ but it was perfect for beginners to get a feel for it and we still got nice and wet on the way down. It took about 3 hours all together including a 15 minute stop off at a nice beach at the side of the river. Didn’t think I’d be visiting a beach in Nepal too often!

After all the fun of rafting we jumped in a pick-up to take us the 20km or so back up to the rafting base to get changed and have a good Dal Bhat lunch. Then it was back on the road to Pokhara. By chance we managed to get on a relatively new and posh bus, that was totally empty! We had all the space in the world to spread out and relax for the next 3 hours while the bus wound its way round the mountain roads. After reaching Pokhara and grabbing a quick shower we headed out in the search of food. In the end, going to a decent place who do a mean Buffalo Cheese Burger and a cheeky pint of Everest to wash it down. 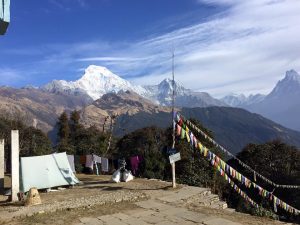 In the morning we set off from the hotel around 7am after breakfast (porridge and eggy toast) to try and get the majority of our days trekking done before the sun got too hot. After a one and a half hour drive out to Nayapul (1070m) we got our boots on and our packs ready then headed down the hill to Birethanti (1025m) where the first TIMS check post is. You have to check in at these from time to time as you walk round so that if any tourists vanish the authorities have some idea of where you last were and can come and get you. It’s a good system, it keeps tourists safe and gives locals jobs at the same time. After our check in we turned left after the nice big new road bridge and headed up the trail that’s been so heavily changed in the last few years. It’s now a track wide enough for a 4×4 or a tractor to get up. Although the traffic flow is tiny. I think its actually better than it was, it will help stop erosion and it is far better suited to the thousands of boots travelling up and down it every trekking season. It also provides an excellent view up through the heavily wooded valley with waterfalls and mountains in the distance.

We arrived at our destination, Tikhedhungga (1480m) at around 12.00 just in time for a decent helping of Dal Baht. Then spent the afternoon relaxing and playing cards while the sun got lower in the sky. It still amazes me how much contrast there is in the temperature in the mountains. It can be well over 30C in the middle of the day with the sun beaming down, but as soon as it starts to disappear the jackets have to come out and people start to shiver. One thing I would certainly recommend to anyone visiting the Chandra Guest House in Tikhedhungga is the fried Snickers. Healthy it is not, but it’s really addictive! The second day of trekking involved climbing the dreaded 3280 steps that lie just beyond our first nights stop. Although I think everyone was a little nervous about the task, it turned out not to be too bad at all. We had an early breakfast and set out by 6.45 to once again try and miss the worst of the heat. This was an excellent move. It gave us chance to take our time climbing the steps with regular breaks to catch our breath and have a drink. I think we were all in agreement it would be worse going back down too.

On the way up it is mainly just your lungs that complain. On the way down, everything complains. By the time the sun started to really kick in and heat up the hill side we were entering the forest and the shade it provides. It turned into a very pleasant walk through the forest as the trail winds steadily up towards the villages above. Due to the early start we were hungry by about 11am so we stopped off for a Dal Baht then pressed on up to Ghorepani (2860m) arriving in the early afternoon around 12.45. The guest house we use here has a great view over the valley with the forest below and the mountains above. That is if it’s clear. Which it wasn’t. So instead, we relaxed, played some more cards, and prayed for a clear morning view from Poon Hill.

Well, it couldn’t have been better. The morning was very clear and certainly made up for having to crawl out of bed at 4.45am! After negotiating the slight traffic jam on the way up the trail to the view point at Poon Hill (3210m) we sat with all the others, of whom there were plenty, and waited for the sun to rise. It was most definitely worth the wait. A spectacular and colourful light show lit up the valley to everyone’s delight. It made all the aches and pains from those thousands of steps seem worth while after all.

Once we had taken it all in we headed back to the tea house for some breakfast and to upload some of the photo’s to Facebook to make everyone back at home immensely jealous. Then it was back on the trail by 7.30am and a walk back up to about 3200m again but on the other side of the valley. For me this would normally be a bit demoralising but when you’ve just seen a sunrise like that, it takes a lot to dampen your spirits! Once on the ridge, the trail goes a little bit up and a little bit down for a while (mountain flat if you will) before reaching our lunch stop at Ban Thanti (3180m).

After a Dal Baht or 2 we followed a small stream down the other side of the hill. The stream got gradually wider as we descended towards the river at the bottom. The trail gets a little tricky in places but its not too bad this time of year with a little care. After crossing the bridge over the river it was a 20 min walk up the hill the other side to the village, and in typical Sali style we stopped in the tea house at Tadapani (2630m) that involved most walking up hill. But in fairness it did have an excellent view! I have to say the next day must have been the easiest trekking day I’ve ever had. A 2 hour steady walk down to Ghandruk (1940m). The morning view was simply marvellous from the tea house breakfast tables. Mostly clear skies with a view up to Machhapuchhre (6997m) that has a tendency to distract you from eating your porridge before it goes stone cold.

As it was a short days trekking and we had time on our side we had a late start. The trail down the hill to Ghandruk is a lovely walk through the Rhododendron forest with monkeys swinging from the trees at various points along the way. After reaching the modern tea house with an inviting garden perfect for al fresco dining in the afternoon sun, we wondered down to the ACAP headquarters. Here they have loads of information about the conservation efforts in the Annapurna region which are not always obvious to the tourist wondering through. They really do have a fantastic influence and make sure that as many people as possible benefit from the money that the tourists bring, whilst trying to keep the natural landscape as untouched as possible. Not an easy task I’m sure. The last day of the trek took us from Ghandruk back down to Nayapul. A descent of almost 1000m. Its not steep though so the knees don’t complain too much.

The trail winds through the foothills past farms and small villages. It’s a very peaceful setting and a great way to end the trek. We stopped a few times for a drink and some snacks on the way down, and although we expected a very hot day due to the lack of tree cover it turned out to be perfectly bearable. After stopping once again in Birethanti for a drink and a final TIMS check we took the last little walk up to Nayapul and the short drive back to Pokhara.