10 Reason Why You Should Travel to Nepal.| Blog | Mountain World Treks

10 Reason Why You Should Travel to Nepal.Published On: March 5th, 2016

Nepal has number of high altitude mountains. Out of top 14, Nepal had a top 8 mountain including top of the world Everest. These are some reasons among 10 Reason Why You Should Travel to Nepal. Edmund Hilary once said, “It is not the mountain we conquer but ourselves.” Considered as the ultimate “Himalayan Utopia” by trekkers and mountaineers worldwide, the mysterious land of Nepal offers some of the greatest trekking and mountaineering expeditions. Nepal is nirvana for mountain lovers. 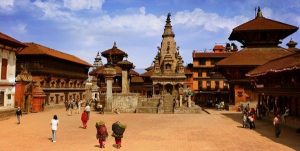 Nepal has more than 101 ethnic groups and 92 spoken languages and rich culture. Each and every ethnic have their culture, language, festival, music, instrument, customs and traditions. Nepal’s vibrant and spectacular festivities and fascinating celebration are bound to leave you in high spirits. World heritage sites: Nepal is equally rich when it comes to historical architecture, art and culture having densest concentration of world Heritage Sites. Kathmandu, Lalitpur and Bhaktapur, along with it have 7 world heritage cultural sites within a radius of 15 km. For those who seek to experience spiritual enlightenment and shrines will definitely take you closer to the world beyond.

Lumbini is also a birth place of Lord Buddha which lies in Nepal. Buddha had spent his 29 year of princely life in kapilavastu palace. He is founder of Buddhism.

Believed to be the Amazon of Asia, Nepal is endowed with rich biodiversity and diverse landscape. The steamy jungle in Terai plains are home to tigers, one horn rhinos, elephants, monkey deer crocodiles, leopards, river dolphins and more than 800 species of birds. Snow leopard, red panda, Himalayan-tahr, blue sheep, yaks are the wild inhabitants that are found in the high altitude in Himalayas.

Nepal is one of the adventures place in earth. Here you have bungee, swing, kayaking, canyoning, Rock-climbing, mountain-biking, Rafting, Paragliding, hot-air ballooning. Along with adventure sport, Nepal posses the spectacular trekking routes with Annapurna trekking circuit which is renowned trekking route. Not only Annapurna Everest, Langtang, Kanchenjunga, and other many more trekking and high-pass are adventure trekking. Nepal has myriad of activities that will get your adrenalin pumping.

Nepal second biggest tourist town may lack the historical depth of Kathmandu, but it more than make up for this with a seductively laid-back vibe and one of the country’s most spectacular locations. Its pristine air, spectacular backdrop of snowy peaks, serene lakes and surrounding greenery make it ‘the jewel in the Himalaya’, a place of remarkable natural beauty. The beauty of the valley is enhanced by its lakes — Phewa, Begnas,and Rupa, which have their source in the glacial region of the Annapurna’s.

Nepalese cuisine possess the most delicious and unique style of taste that will leave you caving from Nepalese gastronomy can be relatively simple and the flavors subtle, but the results are far from bland due to extensive use of spices and rich flavors such as ginger, garlic, coriander, pepper cumin, chilies, cilantro, Mustard oil, ghee and more.

it is often said that while you first come to Nepal for the mountains, you return her e for the people. Nepali people are best known for their hospitality and grace and are quick to smile in the most trying circumstances.

If you are planing for nepal tour and trekking feel free to contact us at: info@mountainworldtreks.com or send us message on Facebook. We will organise all kind of trip at reasonable price with quality service.